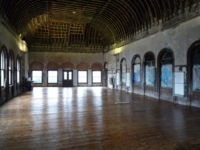 The huge magnificent empty space above the ticket hall began to come to light again during the recent years through campaigns by the Peckham Society, Rye Lane & Station Action Group and Peckham Vision. It was referred to as the Old Billiard Hall as it had been used for many decades by the railway staff as a recreation room. But it was closed and the windows bricked up over 40 years ago and it remained a secret silent place inhabited mainly by pigeons. It was originally the Waiting Room for platforms 2 and 3, so it is also referred to as the Old Waiting Room. Over the last few years, it has been revived and opened to view again. This work has been inspired and led by Benedict O’Looney, local architect and historian, from the Peckham Society, with support from Community Council CGS funds.

First the windows were unbricked and revealed original Victorian paint! The latest work has reached another important stage with the original wooden floor and the electrics now repaired. This was celebrated in the Old Waiting Room with many of those, who had helped and supported in some way, present on 16th July 2010. Read more: