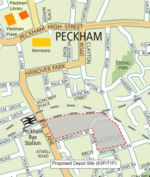 The proposed Cross-River Tram, scheduled for operation from 2016 at the earliest, is a main feature of the Council's plans for Peckham town centre. This is promised to improve public transport to and from Peckham, help to create employment prospects for Peckham people both locally and elsewhere in London, and help to stimulate trade and businesses in Peckham. The Council also wants the tram depot located on a major strategic site (Site 63P/71P) in the heart of the town centre, on the seven acre site stretching from Rye Lane to Consort Road and Brayard's Road, see right for map. The Council has claimed that this also would regenerate the town centre by creating jobs, but the UDP Planning Inspector said that this was based on 'misinformation' that the site was derelict, and he said that the tram depot would remove many more jobs than it created (click here for Inspector's report).

Peckham Vision and others have pointed out that the plan is already causing blight and degeneration which could continue for the 10 years or more before it was completed. In addition the tram depot, which would be a high security site for 24 hours a day would if built: