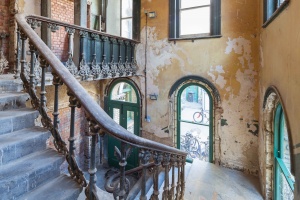 "Up the stairs and through time to the Peckham Rye waiting room we all forgot about" News report on the restoration work to the staircase, which will lead to public accessibility to the Old Waiting Room in the summer 2016.

Watching the very poor implementation of the 'co-design' for the station developments was so exhausting and traumatic it interfered with our ability to keep the website updated on it. Some of the actions were posted on Peckham Vision Facebook.

“A scale model of a town centre is being hand crafted by a group of residents, who want to make it easy for everyone to get involved in the redevelopment of the area. Around 35 enthusiastic novices signed up to build the cardboard model of the area around Peckham Rye station so local people and developers can literally play around with their ideas…” extracted from article in Southwark News 19th June 2014.

The local community played a significant role in initiating and championing the proposal to open up the front of the station. But when the public authorities – Council, GLA & Network Rail – brought the funding together (2011), the community was excluded for two years from the important stage of scoping the project - its purpose and scale, and its role in the town centre economy. This led to community rejection of the proposals for major redevelopment of the whole site. The authorities then agreed to adopt a ‘co-design’ process, which is about to begin. This story is beginning to stimulate commentaries on the role of communities in the future of their own neighbourhoods in an era of major redevelopments, and in the nature of organic change compared with major demolition and rebuilding.

Residents in Peckham say the capital's growing need for housing could soon destroy their local area. Currently there are plans for a multi-million pound redevelopment project around Peckham Rye Station, which will include blocks of flats. But locals are worried the regeneration could have a huge impact on the creative communities who live there. ITV News

"It’s like an embryo growing in the womb, hacking off its leg and still expecting it to grow’ - that’s probably a first for describing plans to redevelop a train station. Yet that’s the strength of feeling - ‘bubbling hatred’ - even, at the designs for a £25m revamp around Peckham Rye station. The investment is long overdue, but as we’ve long argued in this paper, there is no point in regeneration’ if it doesn’t benefit those who lived and worked there before council planners got to work. Peckham, or at least the area around the station, has changed drastically since this investment was first mooted, with a crop of trendy restaurants and shops springing up. The anger at Saturday’s meeting should be a warning shot to the council - don’t destroy this organic regeneration in what is a well-intentioned bid to trigger further regeneration."
babies & bathwater
Peckham Rye Station Uproar

Front page story and page 3 in South London Press on the totally inadequate consultation time to give views.

http://goo.gl/lCNF0K: "Businesses remain in the dark about their future as plans are drawn up for a railway station revamp that could force dozens to leave... The owner of a mechanic’s garage based under railway arches said he had no correspondence from Southwark council about its £25million “Peckham Gateway” project to create a new station square. Mr Smith told the South London Press: “I have heard nothing except through word of mouth... It would be nice to hear something because this business has been here for 30 years and I have been here 15 years… Councillor Fiona Colley, cabinet member for regeneration, said: “The immediate next steps will be the appointment of architects by the end of October, followed by community engagement and consultation over the next couple of months... Eileen Conn, from Peckham Vision … criticised the lack of communication from the council. She said: “There has been no meaningful engagement with stakeholders or wider community. Many people who support the creation of the new square will not be aware that this still appears to be tied to the wholesale clear-out of the area.”

http://www.bbc.co.uk/news/uk-england-london-24786785 - “A number of businesses have been told they may have to relocate under a £25m redevelopment plan for Peckham. Plans include transforming Peckham Rye Station and its surrounding area, creating a new square and encouraging cafes, bars and art shops to open. Southwark Council, which is working with the Greater London Authority and Network Rail on the project, says a business support team is in place to help those affected.”

http://goo.gl/FVVWK7 "Cheap rents and community spirit attract artists and galleries to this vibrant area of south London. But … Meanwhile, in Peckham, the co-director of Arcadia Missa gallery, says that rents have doubled since 2007, but that it is still cheaper than east London. Will Peckham survive the coming tide? “The work of organisations that provide affordable workspace is absolutely crucial to ensure that artists aren’t squeezed out” Margot Heller says. Richard Armstrong, the director of the Solomon R. Guggenheim Museum, New York, and an admirer of the area, looks to the art world’s survival instinct with hope. “The will of a few people—artists foremost, but also writers, dealers, curators and even collectors—can remake reality,” he says.

Warren Nettleford BBC reported on a visit to Rye Lane Peckham of the effects of rising property prices - "Gentrification 'distorting' Peckham". The news item raised the questions whether this was gentrification and was it good or bad for Peckham. Peckham Vision was amongst those interviewed.

Matt Bolton - Is art really to blame for gentrification? "Art is being used as a medium for gentrification, as the middle class displaces that of the working class in poorer urban areas. While the superficiality of this movement is apparent, should the good name of art suffer as a result? … Bold Tendencies is the art space and cocktail bar standing imperiously on top of a Peckham multi-storey car park. It is charged with so much architectural symbolism it's almost funny: a sky-high contemporary gallery in one of London's poorest districts, packed each evening with painfully well-dressed young white people supping Campari bitters, who gaze down upon the streets of pound shops, mobile phone stalls and cheap clothes stores below." More: http://www.opendemocracy.net/ourkingdom/matt-bolton/is-art-really-to-blame-for-gentrification

On the 12th December Harriet Harman the local Peckham MP, accompanied by MPs Tristram Hunt and Dan Jarvis, and transport expert Christian Wolmar, visited the station to see the restoration work, and talk with Peckham Vision - see pictures. They applauded the work and pledged their support for the community's continuing work. See Evening Standard article by Tristram Hunt.

http://www.standard.co.uk/arts/peckham-challenging-hoxton-for-art-6716259.html TIM BURROWS When Tracey Emin and Sarah Lucas opened The Shop in 1993 in what is now Redchurch Street in E2, they probably didn't realise that they were leading the cultural shift that would hit its peak in 2000 with the arrival of Jay Jopling's Hoxton Square gallery and result in a decade of the East End's dominance over art, music, fashion and all things trendy. But 10 years is long enough and a Peckham collective of artists, writers and musicians called Off Modern think it's time to challenge that monopoly. … Everyone knows it's not easy to get people to cross the river and the thought behind the festival is to bring Peckham to complacent east Londoners. Any followers inspired by Off Modern's festival to explore SE15 at a later date will find the current focal point of the Peckham scene is not a shop, but a café. Behind a defunct Woolworths, on top of a neglected 10-storey car park and multiplex set back from the main drag of Rye Lane, is Frank's Café and Campari Bar. Designed by Paloma Gormley (daughter of Antony) and Lettice Drake, the visitor-friendly pop-up café-bar is actually one of the exhibits in Hannah Barry Gallery's Bold Tendencies III show…