Here be Angels audiois a podcast about life in Peckham (SE15) and East Dulwich (SE22). It is produced by Richard Leeming, Heather Davies and Sarah Jane Griffiths, telling stories about life in SE15 and SE22. No drugs, no guns, no fools, no horses.

Here Be Angels episode 1 What makes Lordship Lane one of the most successful local high streets in London, and can Bellenden Road match it? What is the fantastic Dulwich Ukelele Club?

Here Be Angels episode 2 popup food and craft emporium in Nunhead, English Heritage's visit to Peckham and plans for a conservation area on Rye Lane and Peckham Hill Street, no really, and Heather and a Campari or three at the start of the official Peckham season.

Episode 3 - Peckham disturbances August 8 2011, two nights after disturbances had broken out in Tottenham and spread to other parts of London, there was an outbreak of looting and rioting on Peckham High Street and Rye Lane. This podcast looks at the aftermath of those events and the start of the effort to heal the divisions in Peckham.

From tall buildings in Peckham, there are magnificent views from Peckham of the whole of central London and beyond. This is because the River Thames flood plain stops at Peckham town centre, and gives uninterrupted views. The land begins to rise to the east, west and south of Peckham. Here the views are of the natural contours of the land and the wonderful greenery that is stil there between all the buildings and in the streets, parks, gardens, and cemeteries. There are two tall buildings in the centre of Rye Lane which offer excellent vantage points for these views. One is the Bussey building [see below], adjoining the south of the railway track. The other is the multi-storey car park, [see below] here, on the other side of the rail track to the north. The roofs of both buildings are now being successfully used from time to time for cultural and entertainment events showing the huge potential there is for Peckham to utilise these views. 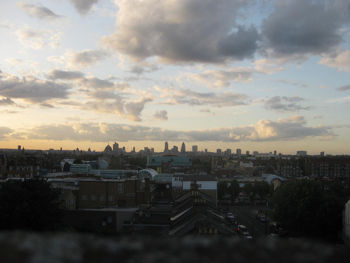 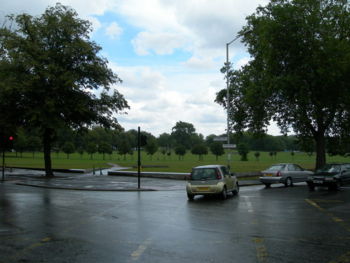